“The love of our family flows strong and deep,

leaving us memories to treasure and keep”

I’ve just spent a lovely weekend up North, with my Mum’s side of the family, as it was my aunt’s 60th birthday. Oh and how she loves to celebrate! My sister and I travelled up on her birthday and arrived to a full house with champagne flowing and piles of wonderful presents scattered in every free space! One of my cousins had made a personalised scrap book filled with fantastic photos through the years and little quotes – the changing hairstyles had us all tickled!

On Friday, my aunt treated all the nieces to a spa day- blissful! All nine of us had two treatments and we were able to hire out the whole spa just for us. As an added bonus, we were allowed to bring in our own bubbly. I opted for a back message which was AMAZING and an eye remedy, which was like a mini facial and then cool stones around the eyes. I can’t say my bags are any smaller but it was very relaxing! The time absolutely flew by – I had planned to go for a swim but before I knew it, we’d been there for 7 hours and it was time to go… At least we were all able to make full use of the Jacuzzi, sauna and steam room. Girly time is the best and we think this may well have been the first time it was just the girl cousins, without brothers, partners etc

I stayed with my 92 year old Nan on Saturday night – she is one of the most incredible women you could ever meet, with some fantastic stories including her attempt to run away back home after she was evacuated during the war. I’m trying to treasure every moment I spend with her and ask her to tell me all the stories I’ve heard many times before in the hope that i’ll remember them in the way she tells them.

All in all, I had a fabulous weekend with a few of my nearest and dearest. I come from a big family and loved having so many cousins when I was growing up but we live quite a distance from the majority so don’t get to spend as much time with them as I would like. Perhaps I should add prioritising family to my list of new year resolutions?

“The Christmas tree is a symbol of love, not money. There’s a kind of glory to them when they’re all lit up that exceeds anything all the money in the world could buy.”

So first up and my travel trip for January was Riga in Latvia. I try to make the most of my days off work, so this was a short trip with just two days in the capital. Unfortunately, I was feeling pretty run down so lacked my usual get up and go and the grey January skies didn’t help.

I stayed at the Wellton Riga Hotel and Spa, which was a short walk from the old town and the spa was great for chilling out in the evening, with Jacuzzis, a sauna and steam room. The buffet breakfast was extensive and you could even help yourself to bubbly!

I started my day with a walk past the Laima clock and Freedom Monument and through Bastion Hill on my way to the Occupation Museum. Like most of the museums in Riga, entrance is free with voluntary donations. I am fascinated by the recent past and this museum was very comprehensive. Next was the Orthodox cathedral with beautiful gold décor on the dome and inside. I was intrigued by the art nouveau district so wandered around keeping my eyes up! The art nouveau museum is small but there are lots of interactive displays.

I made sure I was at the Skyline bar before sunset for beautiful views (from the panaromic lift, glass walled bathrooms and of course the bar). Situated on the 26th floor of the Radisson Blu Latvija Conference Hotel, it is definitely worth heading there for a glass of wine at dusk in order to get the views in daylight and then all lit up at night. To end my night, I went beer tasting at the Aussie Pub backpackers, where you can get 14 beers for the bargainous price of 10Euro! Well worth it.

The next day was more focused on the old town, with visits to The House of Blackheads (merchants house), St Peter’s church with great but chilly views from the top of the spire, Riga’s dome cathedral (look out for organ concerts!) and the Jewish Museum which is a little further than the massive central market, taking up 5 large buildings.

Things to seek out are:

An unexpected highlight, considering I travelled after twelfth night, was the Christmas trees everywhere. Did you know that the Christmas tree as we know it originated in Latvia, where trees where first decorated in the early 1400’s? They helped keep my festive spirit going a little longer! 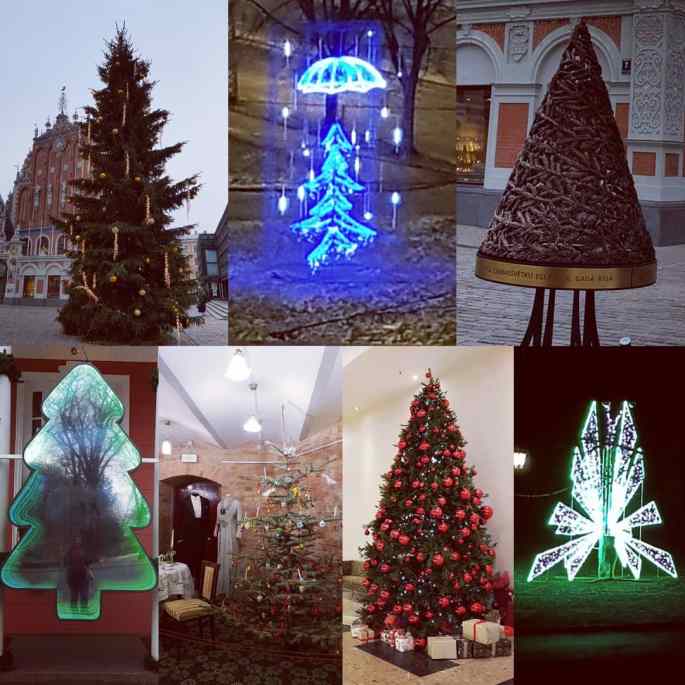